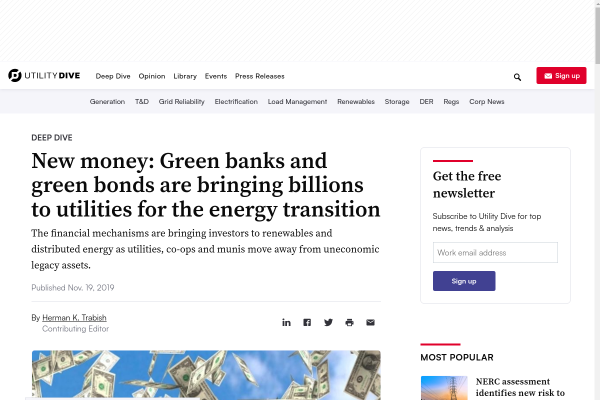 Utilities like Duke Energy and Xcel Energy have issued billions in green bonds to fund renewables development. Green banks in New York, Connecticut and other states are backing investments in distributed resources and energy efficiency. It appears much more institutional money wants in on the green opportunity. 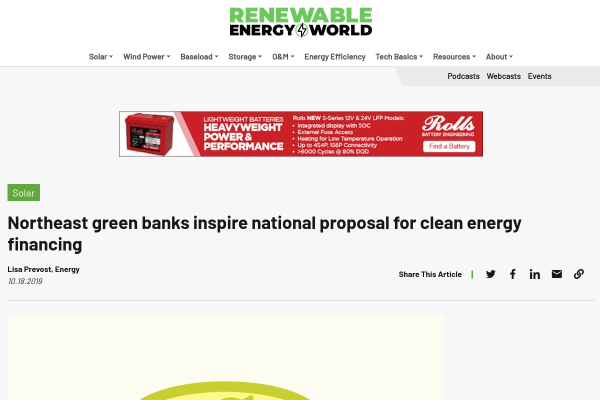 The National Climate Bank Act introduced this year is based in part on successful projects in Connecticut and New York.
A new player is entering the fold in New England’s burgeoning offshore wind sector. After years of testing the waters, Connecticut has finally jumped into the offshore wind game with a recently passed target of 2,000 megawatts by 2030. On June 4, the state legislature approved a bill establishing the offshore wind mandate, and Governor Ned Lamont signed the legislation later that same week. 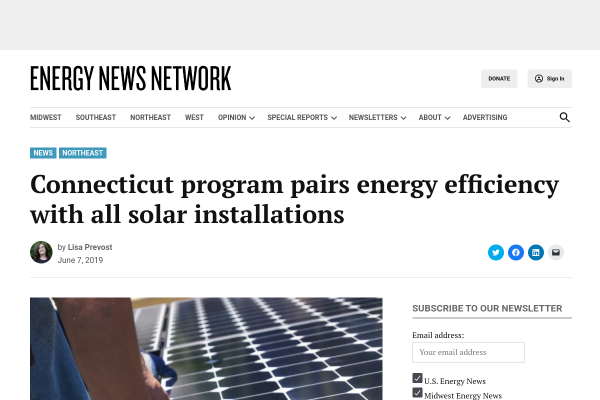 Through a partnership with the Connecticut Green Bank, the Louisiana-based company PosiGen is able to include energy efficiency improvements with all of its solar installations.
Solarize is a unique community-based program that leverages peers and social networks to encourage residential solar adoption through a group pricing strategy. Solarize campaigns spread the knowledge of solar benefits through social networks and engage strong volunteer leadership (“solar ambassadors”) who are passionate about solar energy.
Vastly higher clean energy targets are essential to empower the international community to make the leap to a sustainable future, according to Richard Heinberg, coauthor of “Our Renewable Future: Laying the Path for One Hundred Percent Clean Energy.” In this interview, he delves into the practical challenges involved in the global transition to renewable power sources.
“There are no jobs on a dead planet,” said Sharan Burrow, general secretary of the International Trade Union Confederation. Burrow is vice-chair of The B Team, a coalition of business and civil society leaders that was founded by Richard Branson and Jochen Zeitz. In an attempt to address the dual dangers of economic injustice and environmental disaster that Burrow’s remark references, The B Team launched the Pledge for a Just Transition to Decent Jobs in August 2018.
Alaska is strongly affected by climate change volatility – and extensively engaged in fossil fuel extraction. And now it’s considering becoming one of the first states in the nation to have a green bank.
Why hasn’t saving water as a way of saving energy had its day in the sun yet in the United States? At Horizon18 in Boston on Oct. 11, speakers at the session “Smart Water Solutions and the Energy-Water Nexus” reflected on the sparkle of hope that they believed these solutions provide.
Community microgrids can be initiated by a wide range of individuals or organizations. They include mayors and utilities. They also may include “anchor” off-takers like hospital management, development companies, or community organizations. But to succeed, they require that at least one person really take the lead and energize the project.