We need to modernize "the grid" for more renewable supply. But what is this grid, anyway?

The continental-scale links binding electric networks make the difference between reliable and fragile power to homes and institutions.

This installment in our explainer series turns up the lights on how big grids interconnect - and how those interconnections can foster solar, wind, and hydropower.

To someone facing a wildfire in California or bunking in a shelter after a flood in Louisiana, what does power supply from a far corner of the country have to do with survival? Quite a bit, as this tale of grid interconnection, will show.

Connections of supply from one electric network to another can boost the reliability and stability of energy supply and help forge a transition to cleaner sources of energy. Interconnections have been discussed for decades but there are two factors that make their speed and strength urgent today - the vulnerability of grids to climate-driven extreme weather and the availability of low-cost renewables. But what is a grid interconnection?

In simple terms, a grid interconnection ties a network of local grids together at a synchronized frequency. This allows the exchange of energy from local grids with surplus power to those having a demand higher than what they can produce locally. A power outage due to a storm or failures in the local grid can become unlikely if the local network can tap electricity from a regional grid.

The recent power crisis in Texas highlights what happens in the absence of grid interconnection. After a February 2021 snowstorm, Texas faced the worst power crisis in its history. It caused a blackout, leaving 4.5 million houses and businesses without power.

The storm caused damage to the tune of $195 billion in the state, making it the costliest natural disaster in Texas history. Another unique factor was at play - Texas is the only state in the US not connected to a regional grid. This made it impossible to borrow power from another state when its own deregulated electricity market was not adequately prepared.

If Texas had connected to one of the two regional grids - the Eastern Interconnection and the Western Interconnection in the US - then its switching hub (called a “load center”) could have tapped energy from another state. To know how and why this can work, we need to dive deeper into the US grid system at the local and regional levels.

Grid Organization at the Local Level

Today, the US grid system is a complex machine consisting of several moving parts - more than 3300 utilities, 7700 power plants, and 160,000 miles of high voltage transmission lines. At the local level, any grid has generators that produce energy transmission lines that transfer high-voltage energy to the distribution system. These distribution systems comprise substations that convert and distribute lower-voltage power transformers. These reduce voltage further before the electricity finally reaches our homes. 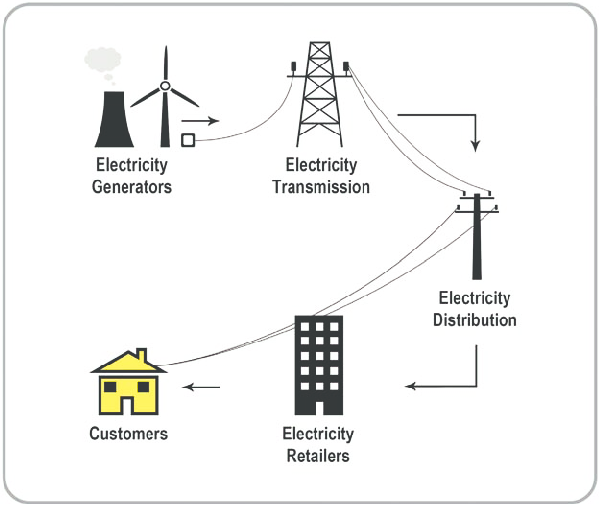 This process involves several entities at each level today - we pay bills to our electricity retailer, who procures energy from the utilities that produce electricity. But it wasn’t always this way.

Historically there were vertically integrated fossil-fuel-based utilities. They were often monopolies that owned and carried out generation, transmission, and distribution. This changed in 1978 when legislation was passed allowing independent generation units to promote competition. The 1992 Energy Policy Act further deregulated the energy market by separating wholesale markets and retail markets. This made it easier for more firms to enter the market. Both these legislations were aimed at promoting competition and thus reducing prices.

The energy supply chain has evolved to the point that today power generation has been further broken down to the household level and distributed generation is on the rise. Consumers like you and me can own and generate power through solar panels or other on-site systems.

Grid organization at the regional level

Today, what we call “the grid” implies an integrated system that involves people operating 160,000 miles of transmission lines, running algorithms to estimate and match supply and demand, and ensuring the power delivered to you is a voltage that your microwave or gadgets can handle. However, the US grid system actually consists of three such independent grids. Why have three?

There are two layers to this. First, a national grid was not planned before local grids developed. The origins of the vast regional grids in the US can be traced back to large independent utilities building links in the 1890s for better use of capacity, greater reliability, and cost-saving. As the benefits emerged, the case for state regional interconnections gained momentum. The federal government stood up the North American Power Systems Interconnection Committee (NAPSIC) in 1962 to link and coordinate operations between big energy generation hubs. The blackout in 1965 that left 30 million people across 11 states without power further accelerated the progress, and interconnections became a federal priority.

The second layer emerges. The first attempt at building a grid interconnection, in 1965, aimed to connect the east to the west coast. Two years later, the first east-west coast interconnection became operational. However, this ran into trouble and was soon halted. What went wrong?

The core engineering challenge in interconnecting is to maintain the same frequency between two separate systems. In this case, the Eastern power system was four times as large as its Western counterpart and the infrastructure required to balance that difference was not adequate. Tweaking continued, evolving through experiment and redesign of the US grid system as we see it today. 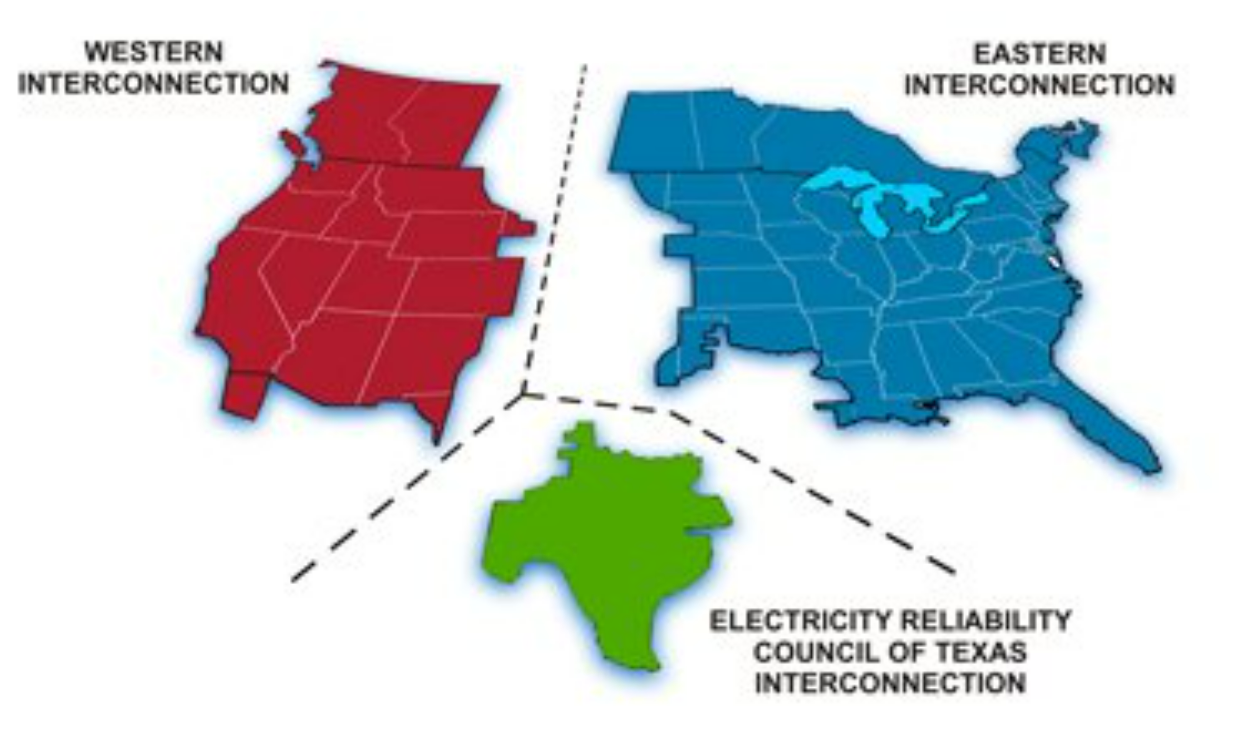 Source: Office of Electricity, US Department of Energy

With multiple local grids linked together, the regulation also needs to be coordinated well. Thus, the federal Department of Energy includes the Federal Energy Regulatory Commission (FERC). That commission regulates interstate transmission of electricity in the US.  However, the state and municipal governments regulate retail power distribution at the local level.

The North American Electric Reliability Corporation (NERC), an independent organization tasked with vouchsafing the bulk power system in North America, keeps tabs on the interconnections. They receive inputs from balancing authorities i.e. entities responsible for matching supply and demand at any given time,  spread over the US. By being a part of one of the two regional interconnections, each state comes under the jurisdiction of the federal government on issues that transcend retail electricity.

Texas continues to be the only state that has its own grid. The balancing authority, grid interconnection, and regulator is a single entity - the Electric Reliability Council of Texas, or ERCOT.

Well-regulated electricity markets are an important factor in maintaining the stability of the grid. While Texas's local economy benefited from deregulation, it was the main reason behind Texas coming so close to grid failure that forced blackouts in 2021.

The deregulated electricity market in Texas led to a lack of excess capacity that could be called on in case of shortages - the private sector didn’t find it profitable to cater for adverse events given the low probability and the costs involved. Further, due to low regulation, winter weatherization was not mandated for turbines and windmills. This led to frozen pipelines and turbines.

Extreme weather conditions aggravated further by climate change are likely to continue, so crises like the Texas snowstorm could become common soon. Texas managed to save its grid by cutting off power at a late hour, leading to loss of life. The absence of any interconnection would have meant no alternative source of supply until the grid was restored.

Why is it significant for renewables?

The case of Texas illustrates the reliability and energy resilience that grid interconnection provides. Similarly, during the recent dry year and heatwave, California could have banked on supply from the east to ease the pressure on its grid had it been interconnected to the Eastern Grid.

This becomes even more important as the US plans to increase the proportion of renewables in its energy mix, which will only increase intermittency (fluctuation in energy produced) on the grid. With regional interconnections, outages or low production from renewables in one region can be compensated by a power supply from other regions.

In the current setup, the deployment and running of renewables are limited to the amount that can be readily absorbed by the grid to match supply and demand. This implies that though solar production is high during the day, it often does not coincide with peak energy demand that occurs towards the evening. The same is true for other renewable sources such as wind. Hence solar/wind farms facilities often operate well below their capacity. This can change with grid-interconnection.

The financial and reliability benefits seem to outweigh the cost according to the experts who conducted the Seams Interconnection Study, especially given the aging transmission system and it being only a matter of time before they start snapping.

Where is the US now?

In 2016, one of the US Department of Energy Labs in Colorado began an Interconnections Seam Study. It was aimed at studying the aging converters between the east and west grids to gauge whether they needed replacement. The people writing the report saw this as an opportunity for building longer DC connections between the Eastern and Western Interconnection rather than simply replacing the old equipment. Thus they simulated and modeled high voltage lines connecting east to west to evaluate if these could recover costs and pay for themselves. Though the report concluded that it would accelerate the integration of renewables and pay for itself, it also predicted quicker closure of coal plants. This made it a bit controversial and led to some political slowdown.

A clean energy transition, though, depends on efficiency and reliability on expansions in grid interconnection.

Regional interconnections will play an integral role in making grids both cleaner and more resilient. There are numerous challenges that will need to be addressed such as increased risk when high voltage lines are affected by weather or lack of supporting infrastructure. Further, it is an operational challenge to manage a complex and dynamic system that necessitates standardization of frequency, transmission, and processes that ensure the smooth functioning of a national interconnected grid.

Though the investment is expected to be more than recovered given that the interconnected grid would work well for a long period of time, allocation of costs between regions and getting all the regions on the same page will test the commitment of the states to move to a cleaner energy future together.

The US can draw inspiration from successful interconnected grid systems such as that in Europe, which will be unpacked soon in the next article in the series.

This topic will come in for more exploration, illustration and debate at the first-ever Yale Clean Energy Conference, April 1 and 2. Learn more and register here.

There's much to learn and relearn about what underpins and lifts our economy. Our student writers are evolving a set of explainers to help you and your business grow. Find them here.