Bigger companies that generate lots of energy, the expert argues, also look likely to need a wider variety of customers.

David Millar is the Principal of Markets, Legislative and Regulatory Policy at Wärtsilä Energy, a Finnish energy company that claims to “lead the transition to a 100% renewable energy future”. In a recent talk at CBEY, Millar highlighted three trends to watch within the energy markets related to , the Inflation Reduction Act, and the future mix of compensation sources for generators of energy.
You may know how electricity is generated in power plants, and perhaps how it is transmitted to your home, but do you know how the energy markets enabling electricity to reach homes and businesses in the United States? Or how we might expect these structures to change in the future? If, like most of the population, the answer is no, then worry not. In a recent webinar delivered at CBEY, David Millar shed some light on the genesis and evolution of American electric power markets, as well as possible trends affecting the domestic energy market of the future.
Operating in 68 countries with roughly 17,000 staff, Wärtsilä works in the marine and energy markets. As Principal of Markets, Legislative and Regulatory Policy at Wärtsilä Energy, Millar noted three trends that we can expect to see in the energy sector. We'll summarize those in the next set of paragraphs.
The integration of distributed energy resources into wholesale electricity markets
From the late 19th Century, the supply of energy to the USA was controlled by vertically-integrated utilities, meaning they controlled the generation, transmission, and distribution of energy. The power of these monopolies shrank through the passing of the Public Utility Regulatory Policies Act (PURPA) in 1978. The act followed the 1973 energy crisis and aimed to encourage energy conservation, the use of renewable energy, and the consumption of domestic sources of energy. As such, it required existing utilities to integrate small energy facilities into the power mix.
PURPA addressed the leverage that existing utility companies held over generation, while orders from the (FERC) addressed their power over electricity transmission. Founded in 1920, FERC is an agency that, among other responsibilities, regulates power that crosses interstate lines. According to its website, it aims to “foster competition in wholesale power markets” by relying upon “regulation and competition”. Its orders have resulted in the creation of Independent System Operators (ISOs) and Regional Transmission Operators (RTOs). Using bid-based markets, RTOs and ISOs facilitate open access to transmission and foster competition for electricity generation among wholesale market participants, unlike the bilateral transactions that preceded them. RTOs and ISOs are very similar, mostly just differing in their geographic extent. Two-thirds of the nation’s electricity load is served in RTOs, as the image below from FERC's website conveys.

FERC's recent Order 2222 requires these regional grid operators to revise their tariffs to remove barriers for distributed energy resources (DERs). These are small-scale power generation and storage technologies that are often important technologies for a renewable future, such as rooftop solar and grid-responsive water heaters. The revised tariffs allow DERs to aggregate to satisfy minimum size and performance requirements that they might not meet individually, and so to become RTO/ISO market participants.
Consequences of the Inflation Reduction Act
The United States Treasury estimates that the Inflation Reduction Act provides $369 billion to climate priorities. Its tax credits will incentivize investment in, and the production of, new clean energy. To see the impacts of this on energy markets, we must get an idea of how electricity is priced.
The price of electricity depends on a regulated form of supply and demand. Renewables have the lowest marginal costs, as their costs are nearly entirely fixed or capital: the “fuel” required to run them is free, and so the marginal cost of electricity is minimal. This means that they are purchased first and take the market share away from traditional energy generation techniques.
Given the nature of pricing of renewable energy, let's consider the impact of the IRA. For example, the Act includes a production tax credit for solar and nuclear that increases with inflation. As the marginal cost of renewables is already so low, this tax credit can drive down the cost to supply electricity to negative values, meaning there may be depressed and even negative power prices. Given this economic incentive for supply, the limiting barrier to the production of renewable energy is likely to be  But renewable energy providers will face bottlenecks in the supply of essential materials, such as rare earth minerals, and transmission availability.
Another consequence of the act is increased price volatility. Renewable energy is intermittent, meaning that it is more difficult to predict the supply of energy that it can provide.  This can lead to increased forecasting errors which result in spikes in energy pricing. Among Wärtsilä Energy’s offerings are energy storage technologies, and Millar suggested that technologies like these, as well as dispatchable energy sources, can minimize the impact of forecasting errors.
Generators will receive a different mix of compensation sources in a net zero future
Generators source revenue from different power markets. Given that clean energy has zero or even negative prices, the increase in the clean energy sector market share as we move to a net-zero world will mean that the value generated and paid through the energy market will dramatically decline. So, generators will need to earn money elsewhere, such as through clean energy incentives or capacity markets, where power providers are paid to be on standby and deliver energy when needed. The chart below from E3 Energy illustrates the momentum. 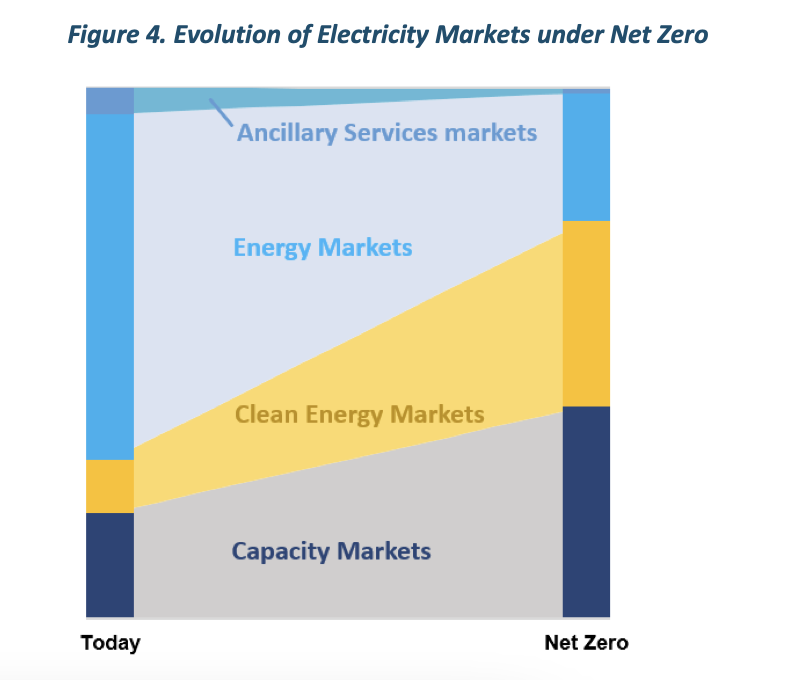 Energy generators will have to source a different mix of compensation sources given the lower profitability from clean energy, such as through clean energy incentives and capacity markets.