Tax credits' appeal made investment in solar and wind production viable over the past 20 years. Now they're expanding.

The Inflation Reduction Act makes tax credits for production and investment available for longer to more players with more certainty.

The richer supply of credit makes for a richer set of decisions and questions, which our reporter explores here.

The Inflation Reduction Act continues, and changes, the story of tax policy driving renewable growth in the United States.
For the past two decades, the US clean energy industry has primarily relied on tax incentives to fund its expansion. Solar and wind projects, two of the most important clean energy sources, have benefited from Investment Tax Credits (ITC) and Production Tax Credits (PTC). The ITC can offset as much as 30% of the initial investment costs of a solar energy facility. According to the Solar Energy Industries Association, since the Energy Policy Act of 2005 created the ITC for solar, the US solar industry has grown by more than 200x. The PTC, calculated based on the amount of electricity produced, often factors in wind projects. The PTC can subsidize the wind generation costs up to 2.5 cents per kilowatt-hour and contributed to the more than 100 GW of wind capacity built in the past three decades.
However, such tax policies have pitfalls. The rates of these credits are inconsistent and unpredictable. The credits are due to phase down year over year and eventually expire every few years without the blessing of Congress to extend them. Wind PTC has already expired fully in 2022 without an extension, while the solar ITC was previously scheduled to be phased down from 30% in 2019 to 10% by 2024. Although Congress in the past managed to pass new legislation to extend these credits in some shape or form, the uncertainties of tax credit rates and potential expirations every few years raise the cost of any long-term commitment to the sector.
Furthermore, clean energy developers often find it challenging to use all the tax credits . Clean energy projects are usually held in separate legal entities, which tend to incur losses in early years due to significant upfront capital investments. As a result, there are not enough, if any, taxable gains that the tax credits can offset. The industry addressed this issue through tax equity, but as this previous blog series explained, it is not the simplest nor the most equitable solution.
The Inflation Reduction Act (IRA) aims at the aforementioned challenges. The $369 billion bill lays the foundation for a more predictable and consistent policy environment with dozens of incentives. Here are a few key incentives that matter most to solar and wind generation.
The bill reinstates the full rates of the ITC and PTC tax credits (30% for ITC and inflation-adjusted 2.6 cents per kilowatt for PTC) for the next ten years as long as projects meet prevailing wage and apprenticeship requirements. The extension provides certainty for the industry to implement long-term strategies and investments. The bill also allows projects to choose between ITC and PTC.
The IRA also includes a few 10% credit “adders” that will increase the total ITC credits to 50% to 70% if the projects meet criteria such as location in an energy community, environmental justice or qualified low-income area (Projects also must use components made in the United States or one of its trading partners). Projects that leverage these additional adders can essentially be built with half of the price paid by the government.
Finally, the IRA adds direct pay and transferability provisions. Direct pay allows projects to receive the full tax benefits through direct payments even without sufficient tax liability to offset with (think of a direct check from the IRS). The direct pay option goes to certain tax-exempt entities (for example, municipal utilities, electric cooperatives, the Tennessee Valley Authority, and tribes). For private entities, the bill introduces a transferability mechanism that allows companies to sell unused ITCs and PTCs to other unrelated parties for cash.
What do the ITC and PTC extensions mean for the solar and wind industry?
Counterintuitively, project developments are slowing in the short term as developers pause to assess the impact of IRA on their projects. Accountants and bankers are busy crunching the numbers to determine whether to elect PTC or ITC for their projects under development. Some utilities that used to only look at wind projects because of their preference of monetizing tax credits over the project’s life will now consider solar projects. Project locations may also be reconsidered, given the tax credit adders. In addition, contract negotiations with off-takers and manufacturers will also see a shift in power dynamics. Utilities are looking to rehash offtake pricing to take into account the additional tax incentives for developers, while developers will pressure domestic manufacturers to lower costs given the domestic manufacturing credits. Even with all the numbers reworked, according to law firm Norton Rose Fulbright, developers may choose to delay the projects because the bonus tax credits will only be available for those placed in service in 2023 or later.
In the long term, the more lucrative and predictable tax credits will undoubtedly bolster solar and wind developments throughout the supply chain. According to the analysis of Wood Mackenzie, renewable energy investments will reach $1.2 trillion between now and 2035, with annual investment doubling by the end of the decade. 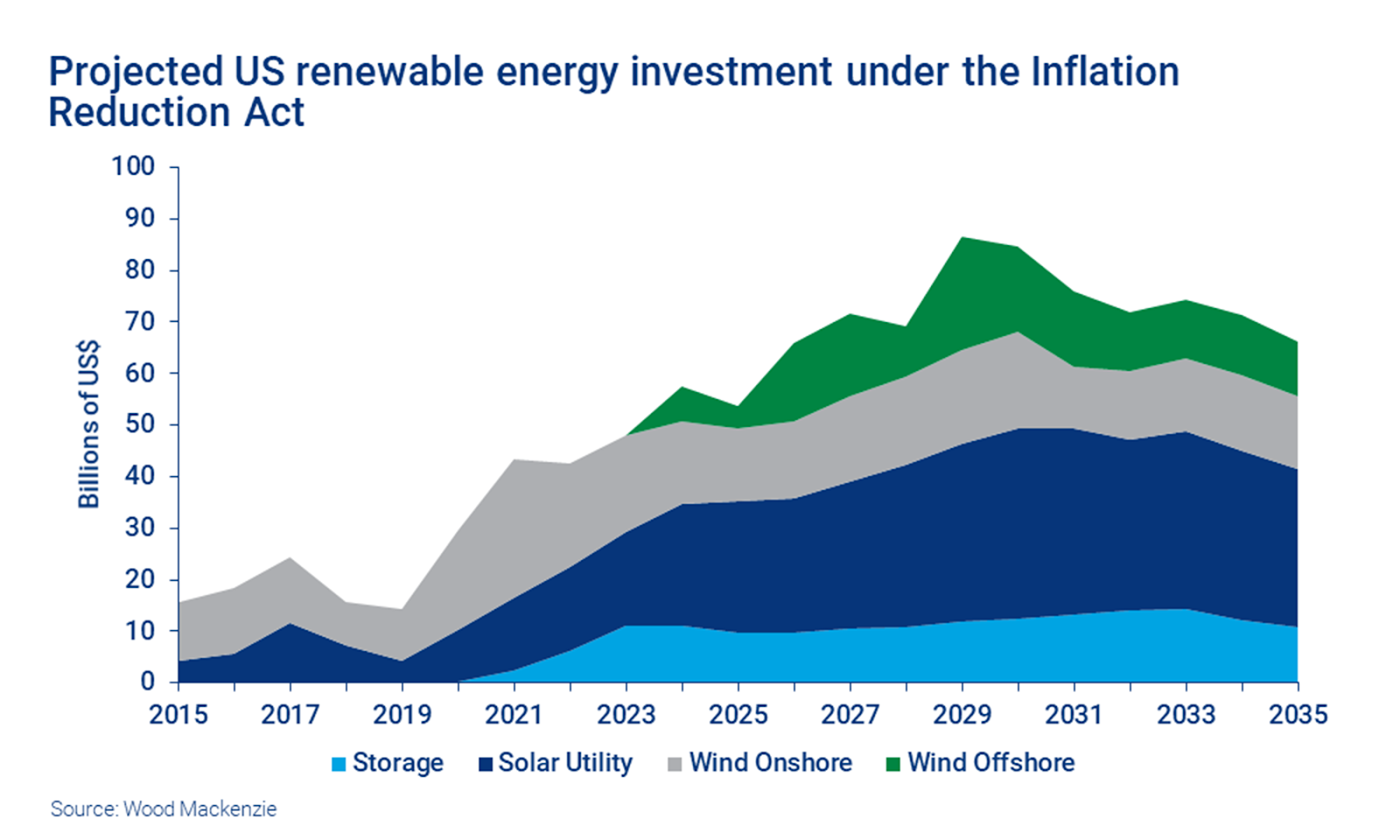 Solar and wind manufacturers also see incentives to move manufacturing to the United States. First Solar, a leading solar module manufacturer, announced that it plans to invest up to $1.2 billion in building and upgrading manufacturing facilities in the US in response to the added IRA incentives.
How does transferring credits transform investment?
The roughly $20 billion renewables tax equity market is highly concentrated on the supplier’s end. Only a selected few banks with enough tax appetite participate as tax equity investors. In fact, over 50% of the tax equity supply in the past decade came from two of the largest banks - JP Morgan and Bank of America. These tax equity investors hold substantial power over negotiating the terms of the tax equity investments. Transferability lowers the barrier of entry for new investors and increases the competition among suppliers. In addition to traditional tax equity investors, other financial institutions and corporations with net-zero agendas will be interested in entering the tax credit transfer market.
Developers struggling to secure tax equity investments will also have a more straightforward and cheaper option to monetize tax credits. Contrary to tax equity investment, selling tax credits can happen without complex tax equity partnerships. It is especially beneficial for smaller developers who were previously deemed not “bankable” by tax equity investors or could not afford the costs of navigating the complex tax equity structures.
The questions have just begun
According to the REPEAT project led by Princeton Professor Jesse Jenkins and Princeton ZERO Lab, the Inflation Reduction Act will cut annual emissions in 2030 by an additional 1 billion metric tons, 42% below the 2005 level. The bill will put America back on track to reach its 2030 climate target. But do not pop open the champagne bottle too soon - there are still many unknowns, and more work needs to be done before we declare victory over the climate fight.
First of all, the eligibility of clean energy projects to claim the full ITC and PTC tax credits and the adders depends on a number of requirements, including prevailing wage, apprenticeship, and siting in a newly-defined “energy community.” The bill defers to the IRS and Treasury to issue additional guidance for defining these terms. In November, IRS issued initial guidance on prevailing wage and apprenticeship requirements under the IRA and expects to issue more guidance in early 2023. In the meantime, according to advisory firm CohnReznick, some investors and developers choose to defer their investments until obtaining clarity on how to qualify for the credits.
Second, it is unclear what the pricing on the tax credit transfer market will look like. The industry expects discounts ranging from 85 to 95 cents by referencing the Low-Income Housing Tax Credit (LIHTC) as a benchmark, but it is difficult to predict where that discount will land compared to LIHTC.
In addition, implementation on a state level will be key to unleashing the full effects of the bill. The IRA makes many tax credits and incentives available on a federal level. Now, it is up to the states to take action in applying these incentives for their own zero-emission goals. However, many states still have deep ties with the fossil fuels industry and are reluctant to flip the switch to clean energy immediately.
Lastly, interconnection congestion and permitting delays will become the new bottleneck, as the IRA will likely increase interconnection demand massively. Even before the IRA, the grid is already experiencing exponential growth in the interconnection queue applications. As of September 2022, MISO’s interconnection queue already consists of 769 projects totaling 118 GW, 97% of which is renewable or storage. New applications to MISO interconnections total a record-setting number of 956 submittals, representing approximately 171 GW of the new generation. Moreover, the US grid is built for centralized power plants that are highly concentrated in coastal areas. With more distributed renewable energy, the transmission system needs new transmission lines and technologies. However, what is missing from the IRA tax incentives are interconnection credits for projects larger than 5MW. Without additional support to upgrade the transmission system and expedite the interconnection application review, the clean energy projects will get stuck in the application queue, delaying their operations.
Under the Biden administration, the United States has set the ambitious goal of reaching 100 percent carbon pollution-free electricity by 2035. Implementation of legislation is the next key step to support capital deployment and the buildout of clean energy infrastructure. As developers grapple with the massive changes the IRA bill will bring to their development pipelines, the industry requires additional clarity around tax credits eligibility, state-level support, and transmission reform. These critical issues must be addressed before the full effects of the IRA can be realized.